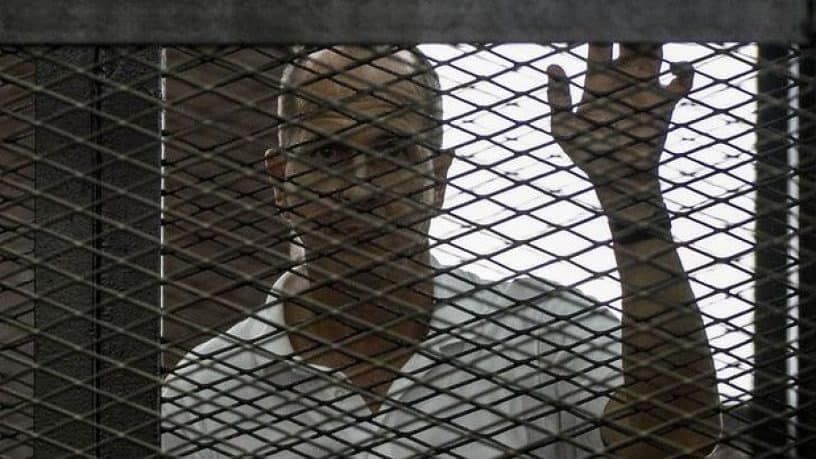 He Zhengjun, director of the Transition Institute and prominent writer Xu Xiao were both detained on Nov 26, along with Xue Ye and Liu Jianshu, a sign of growing suppression against government critics. Courtesy: PEN International.

As jailed journalist Peter Greste describes it, 2014 was his annus horribilus.

But in a New Year message the Al Jazeera correspondent wrote to NSW MP Shaoquette Moselmane, he said although it had been a tough year, he and his colleagues had found “extraordinary support from unexpected quarters” and wanted to thank the NSW Parliament for passing a motion expressing support for the freedom of the press, human rights and the rule of law.

“This experience has, of course, been extraordinarily difficult for the three of us Al Jazeera journalists and our families, but we also understand that our case has come to stand for so much more than our freedom alone,” he wrote from his cell in Mazraa Prison.

Greste was jailed for seven years in June when an Egyptian court found he and his Al Jazeera colleagues guilty of spreading false news to support the Muslim Brotherhood.

Greste was writing to Mr Moselmane after learning that Egypt’s Court of Cassation (equivalent to the Australian High Court) had ordered a retrial.

“This is a significant step towards the vindication that we seek, and that we know must come if a credible judicial system is involved,” Greste said in the letter.

“Although we will probably never be able to draw a direct line between the actions of our supporters and the authorities’ handling of our case here, I’m convinced that steps like your motion send a very clear message that the world is paying attention.”