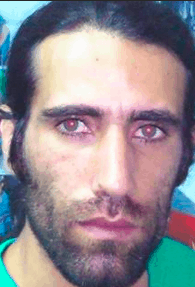 PEN International joins PEN Melbourne, Sydney PEN and other human rights organisations in launching an international campaign on behalf of asylum seeker Behrouz Boochani who is currently detained on Manus Island where he has spent the past two years.

“Behrouz Boochani was was born in Ilam city in west Iran on July 23, 1983. He graduated from Tarbiat Madares University in Tehran with a masters degree in political geography and geopolitics. He worked as a freelance journalist and for several Iranian newspapers –Kasbokar Weekly, Qanoon, Etemaad – and the Iranian Sports Agency. He published articles on Middle East politics and interviews with the Kurdish elite in Tehran.

Boochani’s passions are human rights and the survival of Kurdish culture. With several colleagues, he founded, edited, published and wrote for the Kurdish magazine Werya, documenting Kurdish aspirations for cultural freedom. He wrote a paper advocating a federal system for Iran, protecting minority rights. The paper was delivered at a conference in France on his behalf after he was denied a passport to attend.

On February 17, 2013, officials from the Islamic Revolutionary Guards Corps ransacked the Werya offices in Ilam and arrested 11 of Boochani’s colleagues. Six were imprisoned. Boochani was in Tehran that day and avoided arrest. On hearing of the arrests he published the information on the website Iranian Reporters, and the report was widely circulated. Boochani feared for his safety and went into hiding.

During his three months in hiding, colleagues advised Boochani he was at risk of arrest and interrogation. As a member of the Kurdish minority in Iran, and of both the Kurdistan Democratic Party and the National Union of Kurdish Students, he had experienced threats and was under surveillance. Having been interrogated and warned previously about his work promoting Kurdish culture and having signed an undertaking he would not continue this activity, he was in grave danger.

Boochani fled Iran on May 23, 2013. In July of that year he was among 75 asylum seekers intercepted by the Australian Navy en route to Australia. It was his second attempt at the crossing from Indonesia. On the first, the boat sank. He was rescued by Indonesian fishermen, and jailed on his return.

He immediately asked for asylum in Australia. He was detained on Christmas Island where he developed a deep bond with Reza Barati, a Kurdish-Iranian, also from Ilam. He was transferred to the Manus Island Immigration Detention Centre in late August 2013.

Boochani’s predicament is both unique and emblematic of the horrors facing the men detained on Manus Island. There are currently about 900. Behrouz is among a group of about 100 who are refusing to be processed by PNG immigration officials, claiming the right to be processed for asylum in Australia.

He maintains his sanity between descents into depression with his continuing work as a writer and journalist, and his lifeline via various channels with a few advocates in Australia, including Castlemaine resident and refugee advocate Janet Galbraith. She is in touch with him daily, and has arranged for his writings to be translated from Farsi to English. His accounts of his incarceration on Manus Island read like a Kafka nightmare.

He continues to write articles for Kurdish publications from detention. He remains active as a human rights defender, and is recognised as such by the UN. He collaborates with Australian journalists and human rights agencies, reporting on human rights abuses occurring in the centre. He was torn apart by the murder of Reza Barati, and has reported on the death, through medical neglect, of Manus island detainee Hamid Khazaie. Boochani was one of several asylum seekers arrested and jailed without charge in Lorangau prison during a hunger strike early this year. He remained peaceful during this action.

He says his communications are monitored by Transfield, the company that operates the detention centre, and that, as a result of his reportage and his human rights activity on behalf of fellow detainees, he has been threatened, regularly searched and is subject to surveillance.

The men detained on Manus Island have not been convicted of any crime. Yet they are imprisoned. Isolated. Kept out of sight and out of mind. Those who have been found to be refugees remain in the Lorangau transit centre. They have not been resettled. The men know they are the fall guys, punished as a means of deterring other would-be asylum seekers, as are the men, women and children detained on Nauru. They were in the wrong place at the wrong time. They have been palmed off, abandoned and all but forgotten. They are being driven mad.

The fate of Behrouz Boochani and his fellow detainees is Australia’s responsibility. Instead of being imprisoned and harassed, he should be welcomed for his courageous stand for democracy and granted asylum in Australia. It is a profound irony that he is now experiencing levels of surveillance and harassment that have some parallels with his treatment by Iranian authorities.

In recent conversations with writer and trauma worker Janet Galbraith, he has said that when he sailed for Australia, he was happy because, “I knew Australia as a modern and democratic country. I thought that when I arrived in Australia they would accept me as a journalist. When I arrived at Christmas Island I said: ‘I am a journalist’, but I did not get any respectful response. I was wondering why it is not important for them that I am a writer. When they transferred me to Manus, I said to immigration: ‘Don’t exile me. Don’t send me to Manus, I am a writer.’ They did not care.”

From: ‘Iranian journalist Behrouz Boochani tells of the horrors of Manus Island: out of sight, out of mind’ (Arnold Zable, The Age, 22 September 2015)

TAKE ACTION TODAY
Write to the following MPs to request, as a matter of urgency that, Mr Boochani’s request for asylum in Australia be determined by Australian immigration officials as soon as possible, and that the asylum process is fair.
Read the letter PEN sent to Immigration Minister Peter Dutton here.

JOIN PEN MELBOURNE
Back to all Latest News