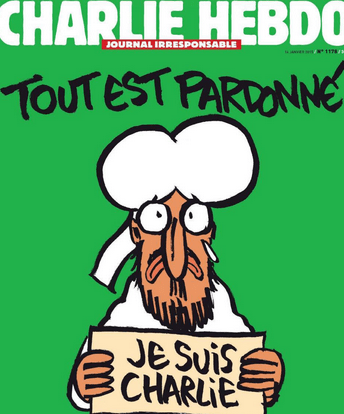 PEN International is deeply concerned by the news that two columnists from the daily Cumhuriyet are under investigation for ‘religious defamation’ for featuring the first, post-shooting cover of French satirical magazine Charlie Hebdo, which depicts the Prophet Muhammad, in their respective columns. Hikmet Çetinkaya and Ceyda Karan, who have received many threats on social media in recent days, could face up to a year in prison if convicted. Access to web pages featuring the Charlie Hebdo cover has been banned from within Turkey following a court order from the Diyarbakır Magistrates’ Court on 14 January 2015. PEN calls on the Turkish authorities to drop the investigation into Çetinkaya and Karan, to ensure their protection from attack and to lift bans on any URLs of web pages featuring the cover which are not in accordance with the law and also are both necessary for demonstrable reasons of public order or other legitimate reasons and proportionate to the perceived risk.

A criminal investigation was launched against columnists Hikmet Çetinkaya, Ceyda Karan and Turkish newspaper Cumhuriyet under Article 216 of the Turkish Penal Code on 15 January 2015, a day after the publication of the front cover of Charlie Hebdo in the newspaper. .The news that an investigation had been launched against Çetinkaya and Karan came amid heightened tensions in Turkey surrounding the Charlie Hebdo cover. Violent clashes have been reported in front of the offices of Cumhuriyet, which is being guarded by armed police, and Yeni Akit, an Islamist newspaper that published a caricature of the secularist founder of the republic of Turkey, Atatürk, in response to Cumhuriyet’s show of solidarity with Charlie Hebdo. Turkish satirical magazines Penguen and Leman have also reportedly been subjected to threats on social media since the Charlie Hebdo shooting.

Turkish Prime Minister Ahmet Davutoğlu, who joined a march in Paris with other world leaders in solidarity with Charlie Hebdo, has criticised Cumhuriyet for publishing the cover:

“Freedom of press does not cover insulting the prophet,” Davutoğlu said on 15 January 2015, “People who may tolerate insulting an individual will clearly not respond in the same way when it is against the prophet. Since Turkey has such a sensitivity, publishing a cartoon that aims to insult the prophet is a clear act of incitement.”

“Our religion does not permit terrorism; there is no place for terrorism within it. And no-one has the right to get up and hold Muslims to account for acts of terror committed in abuse of our religion. A magazine that has gained notoriety with its provocative publications; a magazine that the Pope also condemns, is familiar with their provocative practices. Whether it is about Muslims or Christians; this cannot be called freedom. Violating the limits of another’s freedoms means unleashing terror there. There is a limit to freedom of thought: as far as my freedoms…”

“Certain publications from our country are insulting our prophet by taking extracts from them. What country are you in? 99% of this country is Muslim. Not only Muslims, you cannot insult what anyone considers sacred in this way. And they say security forces came and conducted searches. Citizens came and engaged in sedition. As long as you do things like this, you invite sedition. You open the door to this. Unfortunately, steps that are taken, like these, are aimed at disrupting the nation’s unity and togetherness. When the sensitivities of Muslims on the subject of their prophet are so clearly in the open, persistently going after them is absolutely unrelated to freedom of thought.”

– Via our friends at PEN International